[important]Don’t forget to give the follow up article a read after you are finished with this one.[/important] 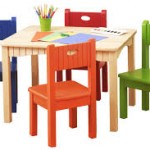 The concept behind calibration tables applies to the colorimeters on the market.

To better understand the original issues, one has to have a basic understanding about the differences between the two forms of color meters that are used in calibration of displays.  There are spectrometers and there are colorimeters (also known as tri-stimulus devices).  The colorimeter is a measuring device based on the use of red, green and blue filters.  The strengths of the device are in its speed compared to spectrometers and better low light capabilities again in the speed department.  The weakness of the colorimeter is in the color filters that are used by the device to determine color.  When designed, a certain type of red, green and blue filter are chosen for the device.  This works best when the device is used on a display that has very similar red, green and blue primary colors to the built in filters.  The problem with these filters is that not all displays on the market use the same native red, green and blue colors for their primaries.

When the colorimeter is used on a display that has colors in significantly different locations than what the device is expecting, the meter will provide very inaccurate results.

On the spectrometer side, these devices are not filter based so they make no assumptions about a particular type of red, green or blue.  The devices simply look at the color spectrum of the light and thus is never fooled by the display.  The devices have accuracy as its strength and speed as its weakness.  They are pretty fast on bright patterns, but when dealing with low light patterns, the device response time comes to a crawl.  Of course not all spectrometers are the same.  The light spectrum may be the same, but what typically separates the devices in terms of quality is the number of samples it takes of the light spectrum.  The entry level devices take fewer samples of the light spectrum, say 64 points, while the reference units could take hundreds or thousands of sample points to plot out the same light spectrum chart.  Essentially, one looks at a chunky graph versus one that is smooth.

The colorimeters tended to all sell for under $600 (except for things like the Klein K10 and Hubble that are $4k to $7k) and most enthusiasts settle for things like the Chroma 5 device at about $600, but more recently a device at the $300 price point has arrived that rivaled the performance of $4k colorimeters like the X-rite Hubble.  There are more entry level tri-stimulus devices on the market than spectrometers since there are many more into photography than home theater.  Many of those photography enthusiasts can use that same colorimeter with the calibration software like Calman and Chromapure.

The premise behind calibration tables is to increase the accuracy of the colorimeter by profiling how that device behaves on many different TV types and technologies on the market.  Right or wrong, the colorimeter will yield a series of results for different types of displays.  These same tested displays are then re-analyzed with a high end spectrometer like a Minolta CS-2000 which is laboratory grade equipment selling in the $40k range.  The differences between the two measuring devices are calculated and correction tables are developed for the inexpensive colorimeter device.  From a math perspective, think of it like this …

Spectrometer reads “5900” on the same display.

We know that the spectrometer reading is the correct one so we figure out the difference.  6800 – 5900 = 900.  This difference of -900 will now be used when the user tells the program they are using a tri-stimulus probe on a DLP projector.

First up, let us look at the promise of what the calibration tables are supposed to deliver.  I have three calibration runs done on a Panasonic LCD-CCFL display in my office; the first run is done by the Jeti Spectro device and the second run was with the C6/X-Rite i1Display Pro

tri-stim colorimeter using solely its calibration tables.  The third run is with the C6 profiled to the Jeti.

Although the calibration tables do not provide for a perfect solution here, the end result with just the C6 and its calibration tables are pretty close to what the Jeti spectro reads.  The error difference is two or so which makes visible detection  hard on the bright end.  Did one really think that a $300 meter would equal the performance of a  $11,000 device?  That would really be wishful thinking.  On the other hand, the profiled C6 gives a set of readings that are virtually identical to the Jeti Spectro device.