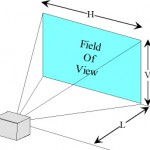 This is a continuation of a piece I wrote back in late 2011 about depending on calibration tables when using a tri-stimulous device like a typical colorimeter.  The original article can be found here.  This article looks at the concept of “field of view” or FOV from now on; as it pertains to the FOV of the measuring device, namely the colorimeter or the spectrometer.

First up the ground rules about when this works and when it does not work at all.  The type of TV display is most important here and defines whether anything we do actually really matters or not.  The base background test pattern that I will use repeatedly is an 80% white windowbox pattern.  The first requirement out of any of our calibration testing is that we need a display that is relatively uniform in nature across its surface.  This can be a flat panel display or a front projector screen.  I will be using a series of numbers to illustrate the differences and the origin of the numbers come from the understanding of the dE formulas and the numbers those formulas generate.

A quick recap of the Delta Error (dE) principle is as follows … and we don’t need the formulas at all to understand this concept.

dE 10 or less = Errors tolerable to the human eye.

dE 5 or less = Very good performance for a consumer display (most TVs on the market).

There are many formulas and ways to calculate this stuff and suffice it to say, plenty of disagreement on which formula is the best one to use, but I won’t deal with that in this piece.  As long as we just use the same formula throughout the process, there is nothing to argue about here.  Everything will be consistent within itself.

So first up, a look at the windowbox pattern on a TV with a relatively uniform surface.  Uniformity from a TV stand point here means that a gray box on one side of the TV screen will be about the same gray on any other part of the same TV screen.  Some parts should not be pink gray and other parts green gray.

Granted, nothing in the world is perfect so no TV out there would be perfectly uniform.  And even if that were the case, I don’t expect our less than perfect instruments to suddenly become perfect anyway.  So the above is what you’d expect out of a TV with a fairly uniform surface.  There might be errors, but we could never see them so it becomes a non-issue.  Now below is an example of a non-uniform display with theoretical error values.  The Panasonic LCD projectors actually fall into this type of category.  Not good at all.  You’d never want to watch any kind of black and white movie on these projectors.

Our discussion from now on will assume that the display is fairly uniform unlike the above example where it is rather hopeless to try to calibrate this out correctly.  You’d actually need some type of zone grayscale control to do it right.  Fortunately, most displays out there on the market are close to the uniform example rather than this one above.

So let’s examine field of view of meters again with the following illustrations.  When a i1Display Pro 3 probe is draped on a typical flat panel, this is what its FOV kind of looks like.  A smallish circle.  If my tripod mounted Jeti Spectro is placed fairly close to the screen, this is also what it’s field of view might look like.

So for our test, we now mount that D3 on a tripod and move it back a bit from the screen.  The FOV circle will get bigger and bigger the further back we go.   At a certain distance, the FOV will now look like this below.

On our uniform display, the readings from this larger FOV should still be fairly close to the readings from the small FOV.  The light output might drop, and that is understandable, but this part does not play into what this piece is about.  The FOV is still covering the same pattern at the center of the screen, just more of it.  The pattern is supposed to be the same through out be it in the center of the white area or the corners.  It is the same white, or it better be or we need new test patterns.