Calibration and Energy Consumption … I want to be an Energy Star

Here is a selling point for TV calibration.  Calibration and energy consumption.  They are like best of friends, or are they?  The image below and those like it started to show up on the TVs in 2011 and are pretty prominent on all the TVs in the Best Buy stores and other brick and mortar stores these days.  Can you trust what they say? 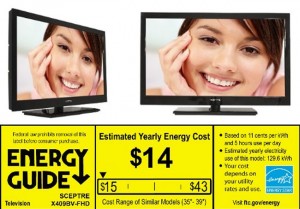 Where did this stuff come from?

Up until 2011, TVs came out of the box looking a certain way.  For a refresher on why they looked that way, read the article on why TVs are not calibrated from the factory found elsewhere on this site. (click here)  So TVs routinely came out of the box set in a picture mode commonly referred to as the “Torch” mode.  The one mode in the TV that produced the most light output.  This was effective at catching people’s attention in stores and since people associate brighter images as better images, this was a good thing.  The manufacturers in TV land were happy and God smiled upon them.

From a calibration perspective, the fact that the displays came out of the box consuming so much more energy was another positive for getting a TV calibrated.  It would actually save a noticeable amount of electricity when calibrated.  The arguments and sales pitches were altered to emphasize the $$ savings on electricity in addition to having the TV last longer.  Or so the argument went, anyway.  If accurate images were not enough, maybe a green angle to calibration would help.

The truth of it was that the energy savings were real, but the same energy savings could also be realized if the user merely changed the picture mode himself to Movie mode or Cinema mode.  If they did that, then a professional calibration would not really end up saving energy at all, nor do anything for prolonging the life of the TV.

Well, some time in 2008/2009 time frame, something happened in the State of California.  They went and passed a law requiring that the TV makers reduce the power consumption of their TVs by 1/3 or so and it applied to TVs less than 65 inches.  I distinctly remember at the time that we joked in our THX class that the TV industry was really not going to do much to meet this demand for energy savings.  I’m sure the legislators thought that the TVs would somehow be redesigned to make things more green and that they were doing a positive thing for the industry.

We figured that all the TV manufacturers had to do was to ship their TVs out of the factory in Cinema mode rather than the usual Dynamic modes and the energy issue would be addressed in one easy stroke.  This move would essentially cost them no money at all to do it.  Well the TV manufacturers did take this route and they did it one better.  They decided to completely retune one of the modes of their TV … notably the Standard mode and turned it into the poster child for the Energy guide.

The mode that the TVs now ship from the factory in, has been preset to present an image that is significantly dimmer than even the Cinema modes on their TVs.  The image is essentially unusable and no rational person would find this image remotely pleasing given that it is just too dim.  Most people would grab the remote control immediately and start to cycle through the various picture modes until they found one of the brighter modes if not the brightest mode.  And since we all know that brighter images are better images, settling on that dynamic image setting is where most end up.

This leaves them with the same energy consumption as if the energy law never existed.  TV performance before energy law and after the law stayed about the same.  So where does that yellow sticker fit into this picture?  Well, the TVs are tested based on that mode that the TV uses out of the box.  (Remember, this is the mode that is so dim that no one in their right mind would deem watchable.)  And so a number like “$22” is concocted for the expected energy costs over the year for the TV in question.

Some people will actually shop for their TVs based on these energy consumption numbers believing that these will be their actual costs.  They will not associate picking the Dynamic mode of the TV as something that would drive up the cost of energy over the course of a year.  No, they firmly believe that the yellow sticker actually applies to them.

The Energy Guide stickers and the numbers on them have become like the old days when people picked TVs based on the resolution of the TV … 400 lines … 500 line … 700 lines…  It didn’t matter that the cable TV they had was the weak link restricted to 320 lines.  History just loves to repeat itself again and again.

The next time you are in the store looking at TVs, have a good laugh with that Energy Guide sticker.  It means absolutely nothing at all.

Now from a calibration perspective, we can no longer tout that calibration will save anyone more energy since the TVs come out of the box consuming even less energy than on a calibrated TV.  Today, a calibration will actually end up increasing energy costs on all new TVs shipped from the factory.

But beyond all of this, the goals of calibration actually have nothing to do with energy savings at all.  Calibration is about seeing the art the way the filmmakers intended and nothing more.  If this actually consumed more energy and shortened the life of the TV, we would still do it.

The best way to save energy with our TVs is to turn them off and not use them.   Go ride a bicycle.  “Estimated Yearly Energy Cost” = $0