Black Box of Goodness … Automation is Thy Name 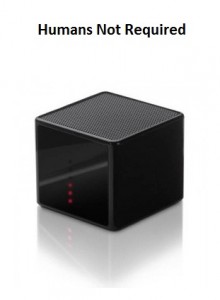 The black box of goodness is a way to describe what automation can do for a professional calibrator when he visits a client’s home.  Calibration has gotten to a point where, depending on the tv and / or processor box, one really can just hit a button and walk away to get coffee while the machine churns away.  Come back and the calibration is done.  Large amounts of time saved and another happy customer.

No wait, the customer is not happy at all.  In fact he is mad and he won’t be referring any business my way ever.  What just happened?

Hooking up a signal generator to the laptop and the TV is a wonderful convenience for the calibrator as it bypasses the tedium of manually going through a test disc menu to bring up the particular test pattern that he might be looking for.  Now when the calibrator selects a 60% gray pattern, it just automatically shows up on screen.  Things can go a lot faster now.  The next step in this process is to hook the laptop directly into the TV or processor box for total automation of the process.  Press a button and the process begins.

The down side of relying too much on automation is that it has the potential to de-value the entire calibration process.  Paying for experience no longer matters here.  This is not unlike some of the older people of the world that grew up watching the grand sweeping epics like Lawrence of Arabia, Ben Hur, the Ten Commandments, Gone With The Wind, and so forth.  The films with the casts of thousands.  Sit these same people down to watch any modern day epic and the moment you mention that the visuals were done in a computer, these people lose interest in the film.

So why did they lose interest in the film?  Because in their mind, the use of computers to create visuals is some kind of cheat and it somehow takes no effort on the part of the artists to create this.  Someone presses a button and the computer spits out the movie.  Obviously, this perspective is distorted and wrong, but it is also very human.

In cases where automation may be an option, one really needs to consider the client and whether this is perceived as something negative.  Now if one is dealing with a company where 10 displays need to be worked on each day and there is little interaction with others, then full automation may be a good idea especially if it results in time and cost savings for the company.  Try this in the home of a residential client and things might be the same or maybe not.  If the calibration work is being done as part of a larger installation and integration project, then more power to you.

If the calibration work is being done for a client/enthusiast that contacted you directly, then one needs to think hard about when and if.

Through the entire process of calibration, only the grayscale and the color management work fall into the automation category.  The other things like setting the user controls still have to be done manually by the calibrator.  As part of a full calibration package where the calibrator is educating the client through each step of the process, automation can be handy when the client also understands the tedium of doing grayscale and color management.  Watching the calibrator work on grayscale for the first 10 minutes may be interesting, but over the next 30 to 60 minutes, probably not.  There are opportunities where some level of automation can be welcome.

And then there is the automatic calibration that suckers people into believing that calibration really is that easy.  Too bad they don’t tell people that 70% of the calibration process on any TV still has to be done manually.  Things like brightness and contrast and backlight levels still have to be done manually with subjective decisions in some cases.  Things like sharpness and overscan also need user intervention.  Skip all these steps or do them wrong, and the automation of the grayscale and the color balancing will mean little.  A perfect 30% on a exam still means you failed.

And what happens when the black box automation fails you?  The calibrator must have the ability to know and catch problems in the automated process.  Beautiful graphs can still lead to some bad images.  I recently had some fun with a Lumagen processor and tried out the automation.  Turned out the processor box automation process was not designed for an external signal generator thus resulting in a very problematic image.  The solution was to use the internal patterns built into the system … except that the internal patterns do not go through the entire video chain like any other signal plugged into the device would be doing.

We could only make the image look right by doing things manually and foregoing the convenience of automation.

The problem with automation for those that are inexperienced is that they do not possess the ability to identify when the process goes wrong or what to do about it.  There is an assumption that the process is infallible when clearly it is not.

For the inexperienced and ignorant, “I can’t lie to you about your chances, but you do have my sympathies…”

Things really are that easy, now all I need is your credit card number.

The most comprehensive calibration training out there for those that just want to do it right. One day and Two day training available. Next Classes Vancouver - February 2023. Private Sessions also available Read more ...