Software Cage Match … Two Go In, One Comes Out

A look at the two software offerings that professionals currently have access to for calibration work.  I have both in my arsenal and I sometimes use both in the same setting for verification purposes.  It is good to have confidence in the hardware and the software. 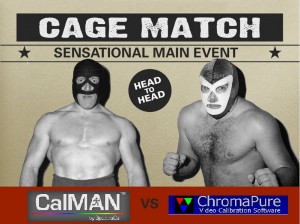 The Comparison chart is mainly based on how the professional versions stack up against each other, although a few notable elements about the DIY versions are also included.  The Calman Expert version is the one chosen for the comparison to Chromapure.  (Drop me a note if you see any omissions or errors here.)  Do I maintain that this is anyway a complete list for comparison?  Of course not.  These are simply elements that I as a professional calibrator might be interested in and I find that other professionals are similarly interested in.  If someone doesn’t like the way this list is presented, then I suggest they go make up their own list on their own web site.  (You know you are doing something right when both sides show a level of displeasure at this article.)

As for the question of ease of use, the answer is that Calman is both easier to use than Chromapure and harder to use depending on the program itself.  In some ways, having to choose between 31 flavors of ice cream may be more confusing than just one flavor.  Which to choose, and the anxiety builds … did you pick the right one?  Maybe that other one would give you better results?  The mind games begin.  With only one flavor, there is no choice and nothing to choose.  It all becomes academic and one moves onto the more pressing issues of just learning how to calibrate versus getting caught up with flavor selection … or color selection.

Problem at this point is that although the same flavor also exists whether there is only the one Chromapure flavor or the 31 flavors of Calman, the user doesn’t know that.  He doesn’t know what is best for him and he convinces himself that the program is harder to use than it really has to be.  Sometimes too many flavors can be a bad thing especially for those just entering the realm of self calibration.

At its heart, calibration for a professional involves just a few steps; Precalibration, Grayscale, Color Management, and a Report.  Roughly four steps.  Chromapure breaks it down to eight steps, but some of these steps are duplicated so there is only six or seven steps for most calibrations.  The program assumes that the end user knows that the user controls on the TV have to be set right before getting to instrumentation.  When one gets to Grade 5, there is the assumption that the material in Grades 1 to 4 do not have to be taken up again.  In the THX class for instance, Day One material is reviewed in 15 minutes at the start of Day Two and then it continues onto new material.

There actually is a workflow in Calman that is every bit as streamlined as the Chromapure workflow if not more so.  The Professional Workflow in Calman is just that.  At its core, there is one page for pre-calibration capture of both grayscale and color data.  Then the second page is dedicated to doing the Grayscale (and Gamma).  The third page is dedicated to doing Color Management.  This data is then all transferred to a final page that is the report containing the pre-calibration and the post calibration data.  Short of printing out the report, there are only three steps in the calibration process.  (In Version 5 of Calman, the System Integrator Advanced workflow is about five steps now, although it could easily be trimmed to four steps. 🙂 )

Three steps versus the 6/7 steps of Chromapure.  It actually is simpler and more streamline … but only a small number of people actually know this.  Best kept secret of the Calman program.  No wonder many people tend to say that the Chromapure program is easier to use than Calman.

If a person is fresh off an ISF class for instance, they play with the ISF workflow on Calman in that class.  It may not really be 31 steps, but the joke is that it is.  Comparing 31 steps of calibration to the 6/7 steps in Chromapure and Chromapure wins.  This is called bloat … and the guys from the ISF class will keep using this ISF flow and keep getting frustrated.  The workflow works when a person is completely new to the world of calibration, but after five calibrations, the workflow gets frustrating.  Most pro-calibrators don’t have the time or enthusiasm to go searching for the Professional workflow which is right under their nose to know that something better exists.

If it hasn’t been made clear, there is nothing stopping the Calman program from being just as easy to use as the ChromaPure software.  But until people actually are able to find that professional workflow in the sea of workflows, the program will continue to be considered as harder to use than ChromaPure.

The most comprehensive calibration training out there for those that just want to do it right. One day and Two day training available. Next Classes Vancouver - February 2023. Private Sessions also available Read more ...