Calibration … Who Died and Made You God?

Thanks to Ray for suggesting that I write this one about calibration, although after we talked, he realized that I would not be approaching this from an angle that he had in mind.  He came to regret asking me, but it’s too late, the idea is out there now.  :p  Told him he has to kill me to make me stop. 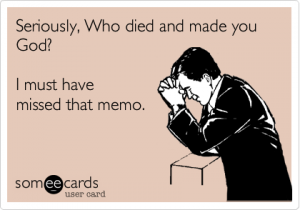 The discussion (or argument) goes as follows; does a calibration with only a test disc like Digital Video Essentials or the Disney WOW disc constitute a calibration?  If one listens to some of the professional calibrators on some of the forums, you’d start to believe what they say, which is that it is not calibration.  At least that is what they want the consumer to believe.  But just because I want someone to believe something doesn’t mean they will and doesn’t make it the one and only truth.  There is more than one point of view here with one side saying it is not calibration.  Here is the counter point to this.

There are a set number of steps in the calibration process and this is usually the order of how things progress once the best mode on the display is chosen.  Typically the Movie mode or Cinema mode or Custom mode.

3. Sharpness (can be done anytime actually … not order critical)

There.  A ten step process to a full calibration which is simple and straight forward if everything in the TV works right.  Of course, that is a big if these days because lots of the so called advanced features on many TV sets do not work as advertised.  They don’t just do what you think they do or, they do other weird things to the picture which makes them useless.  More steps get thrown in if people want 3D or to do anamorphic lenses and stuff.

It is generally agreed upon by the TV industry experts that if one just sets the user controls correctly and nothing else, they will have achieved about 60 to 70% of all the improvements that the TV is capable of in terms of us visually seeing it and appreciating that difference.  Okay 60-70% with just a disc.  That is nothing to sneeze at.  White balance/Grayscale calibration will take that number up to about 95% of all possible improvements.  Additional color management work takes things from 95% to 99% … but not 100% because no TV is perfect and no test instrument is perfect.  We can get to 95% without a color management system because most TVs color and tint controls get things pretty close already short of the controls being broken.  Some of the 2010 and 2011 Sharp sets fit this exception of the controls not working right, but everybody else can conceivably attain this 95% mark.

Of course without a reliable instrument, you could never know how much higher than 70% your tv could get, but that is beside the point.  Let’s get back to the 60-70% number that can be achieved with only the user controls.  Sure 70% is not 95% or 99%, but it is certainly better than 0% or 20%.  A 60-70% improvement in display performance is nothing to sneeze at and quite an accomplishment for a $20 test disc (or in some cases a $0.20 test disc … downloaded and burned to a DVD).  There are caveats to this, to be sure.  The base assumption of all this is that people can follow instructions and can actually set those user controls correctly with the test disc.  These numbers are frighteningly lower than you might think.  Either people can’t read or simply refuse to follow instructions correctly.

100% of the portion of my clients that tell me they used a test disc like Digital Video Essentials or AVIA or the Spears and Munsil disc or even the Disney WOW test disc, all say they did it correctly.  Problem was, it turned out that at least half of them, 50%, ended up doing some of the key calibration elements wrong, which had me scratching my head wondering which part of the visual instruction did they not understand.  So when one messes up key elements like brightness and contrast, there goes the 70% improvement they could have achieved.  So 100% of them tell me they did it right and less than half of them actually did it right.  I can’t believe any of my clients then since half of them are inadvertently lying to me.

But let me be kind and say that people can read and follow instructions and that they are able to correctly perform all the necessary changes on the user side, then they really are that 60-70% of the way there.  Now some professional calibrator comes along and proclaims that what the enthusiast did was not calibration at all because calibration is only done with instruments.

This sounds like some zero sum game as it is called; either all the way or nothing else counts.  Who gave them the right to squat on that word and only define it the way they want?

To be fair to everyone, let’s just break this whole process down into two pieces, the basic calibration and the full calibration.  Both are calibrations.

Does doing seven or eight of the ten steps still does not amount to calibration?  It may not be a full one, but it is a partial one and it has achieved tangible results because the TV is 60-70% of the way there already.

Let’s talk oil changes and tune ups for cars now.  The typical lube shop does the oil and filter change but they also do these 20 point inspections and top off fluids and so forth.  The shop that does the full tune up to the car will still do all these things in addition to other elements.  An oil change is a partial tune up for the car.  The things that get done here are merely a subset of the full tune up service that usually costs much more.

What if our car shop omitted all the elements of the oil and filter change in their tune up service?  Would that be okay?  Would the tune up be a full tune up?

Of course one has to do both the user controls and use instruments to get the full calibration experience, but the idea of a partial calibration is still very possible and real.

I further joke with my friend about the “equipment or death” thinking.  I stack him up with his experience to only do the user controls and anything else by eye … versus a novice using a $200 cheap colorimeter.  I ask him who will most likely do a better job here.  The novice would have done the full calibration with his very error prone gear and my friend would have done his “NOT” calibration and the end result would be that his TV image would look superior and more accurate than the person that really did the calibration with gear.  If we brought in good test gear, we’d find the improvements on the “NOT” calibration to yield a improved number closer to 100% than what the novice could accomplish with his test gear.

Basic calibrations can also exist and the two can peacefully co-exist with each other.

So with only a test disc in hand, it is still very possible to achieve real improvements to the image and don’t let any snootie professional calibrator convince you otherwise.  Just remember though, that the onus is still on you to actually follow the instructions correctly to get these real improvements.  So many people have failed here … and they don’t even know it.