So the question I throw out there at the start of this is … just how important is resolution to the overall enjoyment of a film?  How much detail is enough for someone to sit back and enjoy a film and not find themselves wishing for more?

Let us start this off by looking at the following test pattern as taken from the Digital Video Essentials HD Basics Blu-ray.  This pattern is called an overscan pattern and it shows us how much of the image is visible at one time.  Two versions of the image are presented here.  The 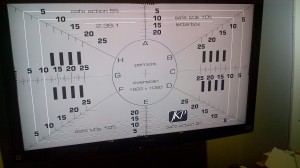 first image is how the entire test pattern should look like when the TV is set up correctly.  The second image shows you what the pattern looks like on 100% of the 1080p displays on the market as they come out of the box when people turn them on. Keep an eye on the left and right edge of the image.  Roughly 2 to 2.5% of the image has been cropped off or zoomed out so that the overall image is slightly larger albeit missing the two percent on a 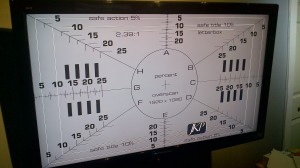 So all digital sets come out of the box chopping off 4 to 5% of the image, but if we look in the television’s menu system, we can find a control that will undo this effect and force the TV to show you 100% of the image.  The name is different on most brands of TV so here is a rundown of the control name that you will be looking for by brand for some of the major brands. 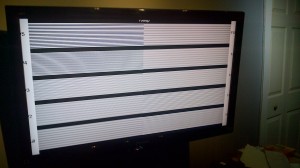 When the pattern looks like this, as a viewer, you are seeing the full 2+ million pixels of information that comprise this image.  Now let us look at a second test pattern that shows us resolution.  This one is also from the DVE disc and it shows detail.  If you can see the lines in Group “Full”, it means that you can see the finest resolution that the 1080p tv is capable of displaying.  Each black line here consists of one row of pixels.  One black, one white, one black and so forth.  This is the finest level of detail the TV is capable of showing.  You can see the full resolution of 1080p here; all two million plus pixels of detail. 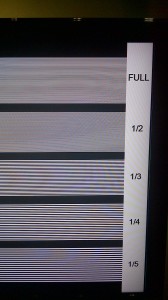 Now if you can only see the second group in Group 1/2, it means you can see one million pixels worth of detail or roughly 720p resolution.  Each line in this group consists of two pixels of black and two of white.

Hard to believe, but Group 1/4 represents DVD resolution and the last Group 1/5 represents about Laserdisc resolution.  How did we ever think that the Laserdisc image looked good?  And it was king of the hill at one point in time 20 years ago.

Here is a close up on the Full resolution pattern when the TV shows the full 2 million pixels of 1080p. Following that is a close up shot of what the pattern looks like when you watch it in out of the box condition where the image has been zoomed or enlarged by 4 to 5%. The things to look for here are those big thick lines in the Full area mixed in with the

thin resolution lines. Very noticeable here. We don’t see it as much

ixels of detail. This interference or degradation of the image h 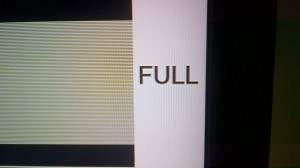 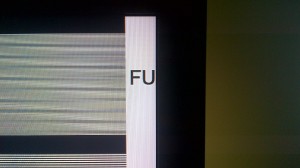 While at this close of distance it is possible to see both the interference and the detail, at normal viewing distances, the interference is actually much easier to see than the real detail and so the interference obscures the real detail at the 1080p level of the image.  If we cannot see the details down to the single pixel level, then we have effectively lost 1 million pixels of detail.  That 1080p display that you have been bragging to your friends about is now delivering a half resolution image and the TV is not much better than a 720p display that sells for considerably less money.

Yes, losing 1 million pixels of detail is a terrible thing to happen, but most consumers do not put test patterns like this on their TV so they will never know that they are just getting 720p quality.  After all, 720p quality is still about three times better than they get from their DVDs and that is a difference they can see.  They could be getting six times more detail by making one small adjustment to the picture setting … and it’s that easy too.  Consumers do not know that they are missing 1 million pixels of detail so they do not miss it.

So the question becomes, why are 1080p displays coming from the factory being sent out delivering only 720p image quality?

The answer has nothing to do with the pristine material from our Blu-rays.  It has everything to do with the cable and satellite TV broadcasts that people spend most of their viewing time watching.  Imagine the scenario where all displays actually come from the factory in this full 1080p 2 million pixel image mode.  We see everything in the image and there is no zooming or cropping of the image.

What quickly happens is that during the art of channel surfing the cable box, one will often enough come across one or two or three or more channels being broadcast with substandard equipment and the people responsible for this are simply too cheap to want to correct the issues.  (Let’s call them cheap bastards)  They can still broadcast an image after all and that is all that matters.  It matters not that the image might be shifted to the left or right side by about 1 cm or so.  The shift causes a black line to show up on the side of the TV.  Sometimes this black line may be green … or even have digital garbage moving through it.  When you change the channel, the problem goes away.  Even things like closed captioning information on the top of an image will show up at times during the commercials of some HD material.  These are the dashed white lines that appear at the top of the image of typically SD commercials being shown on a HD channel.

Well, it will not take long, but some mom and pop who channel surf a lot will eventually notice this video garbage and then start to suspect that there is something not right with their brand new Sony (insert brand name here) television.  So the local Sony repair shop is called and the repairman comes to fix this problem with the video garbage.  This is a source material issue and there is nothing the repairman can actually do to fix this.  There is nothing at all wrong with the TV.  So the repairman will invariably set the TV to zoom out the image by those few percentage points and the video garbage goes away.  So does 1 million pixels of information, but that is a small sacrifice and no one will notice that.  Our repairman gets back to his office and pulls out an invoice and makes it out to Sony.  This repair visit took up one hour of his time.  Sony needs to pay him for this warranty visit.

And suddenly things start to make more sense.  Rob the TV sets of 1 million pixels of detail in order to save money from all these repair visits that won’t have to be made.  No one puts up test patterns so no one will ever notice that they are losing half their picture detail.  If we were in the TV makers shoes, we would do the same thing.

Fortunately for us,  we are now better educated and will make this change to give ourselves the full resolution of the TV that we paid for.  We will also understand that cable TV can be junk and video garbage on one or two channels and not on all the channels does not mean that the TV is broken.  You never want to find yourself in a position that you will knowingly degrade everything you watch in order for a 15 second commercial to look right.